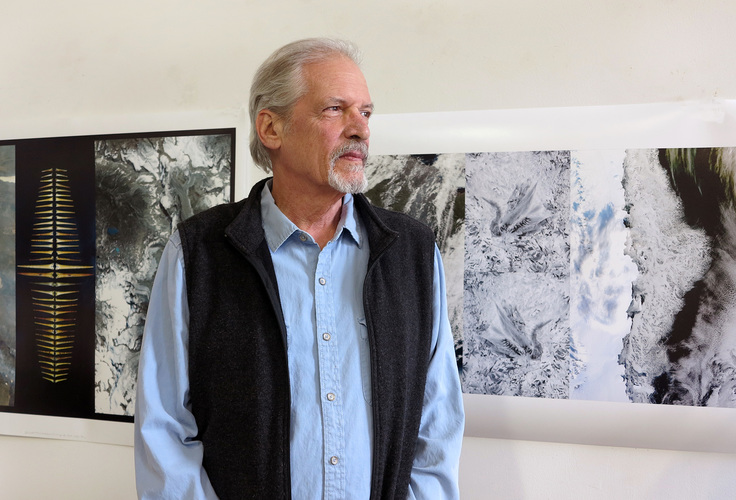 Daniel Ranalli grew up in coastal Connecticut.  He has been working as a visual artist for over 45 years. His work is in the permanent collections of over thirty museums here and abroad including the Museum of Modern Art (NY), Museum of Fine Arts Boston, San Francisco Museum of Modern Art, Nelson-Atkins Museum, Harvard Art Museums, Minneapolis Institute of Arts, Rose Art Museum (Brandeis), List Art Gallery (MIT) and National Gallery of American Art (Smithsonian). He has been included in over 150 solo and group shows in the U.S. and abroad.  Daniel has also been the recipient of two fellowships from the National Endowment for the Arts and multiple fellowships from the Massachusetts Cultural Council.
Although largely situated within the medium of photography, Ranalli’s work can often be characterized as conceptual and/or environmental. The work is frequently rooted in the balance between control and chance – such as the unforeseen results in the photogram, the found scrawls on a classroom chalkboard or the path of a snail in wet sand.
In 1993 Daniel Ranalli founded the Graduate Program in Arts Administration at Boston University where he taught until 2015.  By that time it was one of the largest programs of its type in the U.S. and typically enrolled 80-90 students in both the visual and performing arts tracks.  WIth a significant international presence, Daniel brought BU students to Barcelona and Cuba to better understand international approaches to managing arts organizations.
He also wrote extensively on artist issues for several publications in the 1980s and 1990s. A selection of his FORUM columns for Art New England can be found on this website.   Daniel Ranalli lives in Cambridge and Wellfleet, Massachusetts with his wife the artist, Tabitha Vevers.

Statement:
I am largely a self-taught artist/photographer, although my effort was rigorous and my determination intense.  I grew up in a blue-collar household and never met an artist until well after college.  Majoring in art was not something one did if one was the first in a family to go to university.  I came to it later – dropping out of a PhD program in Economics in 1971 to commit myself fully to photography.  It is entirely possible that had I gone to art school, I would never have come to do some of my strongest work.
I began to make the series of photograms in 1974 – almost by accident – and I did virtually nothing else in the medium for a decade.  I think I have always been intrigued by the idea of exploring the most basic aspects of the medium.  At its core, (analog) photography’s essence is its light sensitive materials, which appeared centuries after the optical device of the camera.  The photogram, using neither camera nor film, became a way for me to explore that fundamental trait.
In recent years, with the advent of digital photography, I began to see the pixel as photography’s irreducible fact.  And so, in my recent series “Iconic Paintings of Cape Cod”, I have tried to make work that addresses the primacy of the pixel.


Daniel Ranalli is represented by:

In 2021 I had the opportunity to collaborate with the composer Lola Perrin for a commissioned short film for the U.K. Consulate in Boston to be part of the Climate Action New England: The Road to COP26 Conference on climate change.  It includes work from  my series Fire & Ice (Climate Change) I hope you will take a look here.

Click here to see a video - interview that was produced during the 20 year survey show TRACES at the Provincetown Art Association and Museum in 2011.

Click here to read an interview in Maverick Arts with Charles Giuliano.

Take a look at this short video on Daniel Ranalli raking one of his
Zen Gardens on the beach in Nova Scotia by award winning
filmmaker Tony Sherin.