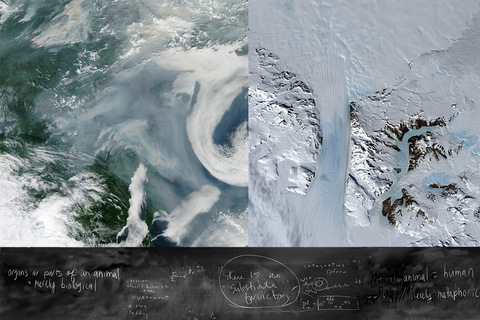 NASA Satellite photographs with my photographs
Fire & Ice (Climate Change)
FIRE-ICE-WATER.
This series, which I have been  working on for several years, begins with NASA satellite images of major wildfires; glaciers, glacial calving; hurricanes and floods.  There is an extraordinary formal beauty to these photographs even when they depict catastrophic or life-threatening weather, or geological events .   I am motivated by the current global catastrophe of climate change and rising sea level and the failure to take serious remedial action.  Perhaps they are the 21st century analog – in a very minor way - to the 19th century photographs and paintings that motivated congress to create national parks and preserves.  It is a task that must be taken up by many of us.
All the other photographs and physical material  in these pieces is  my own work and attempt to reference geological history in some way.   There are images from my “Beach Deaths” series made over many years along the Massachusetts coast, and my  “Found Chalkboards” series, photographed in empty classrooms when I was teaching at a nearby university.   The chalkboards are slightly altered and occasionally combined digitally with hand drawn elements. The birds’ nests are a suggestion of their creator’s descendancy from the ancient reptiles.
I have also used actual physical objects in some pieces, such as the shells and tails of horseshoe crabs (which have endured unchanged for over 350 million years), as well as fragments of whale bone, an animal we once hunted and now seek to save from extinction.
The Robert Frost poem (“Some say the world will end in fire,/ Some say in ice.”…) played often in my subconscious as I worked the ideas through.